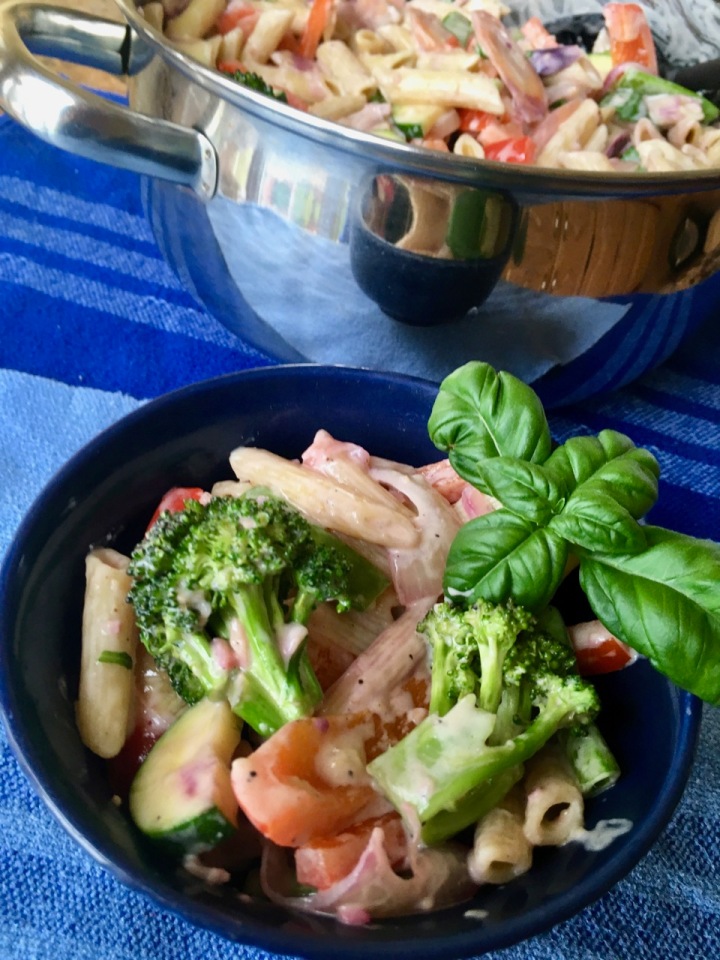 So, pasta primavera is built on a pretty basic principle: when springtime rolls around and you finally have access to fresh vegetables again after the long winter, get a bunch and throw them in some pasta. (“Primavera” is an old Latin word for “springtime.”) I’ve made various pasta primavera recipes at various times of year, and while it’s certainly never a bad idea to eat vegetables, it’s especially exciting if you can get super-fresh, first-harvest-of-spring veggies.

This year I was looking forward to trying this amazing recipe from The Pioneer Woman.  She’s a well-known name in the food blogging world, to say the least; her posts are approachable and funny, with lots of great step-by-step photos, and I’ve been looking forward to exploring more of her site.  Also, my veggie haul for this pasta primavera was the best I’ve ever had. We had local sugar snap peas, broccoli, and rainbow carrots, courtesy of our cute corner market (Kredl’s in Hampton).

The carrots came in orange, purple, and yellow. The centers of the purple carrots were totally white; neat, eh?

They also had really fresh, firm red bell peppers and zucchini. I was feeling optimistic, pretty sure this would be the best pasta primavera ever. And in the end, it was, but it was a long road to get there.

First off, this is a prep-intensive recipe, at least by my standards. Any dish with this many raw vegetables is going to find you standing in the kitchen chopping for a while. She specifically says to chop all the veggies first; a sensible idea when there are so many, and none are going to cook for very long. I did this, and arranged them in the order in which they were going into the pot. 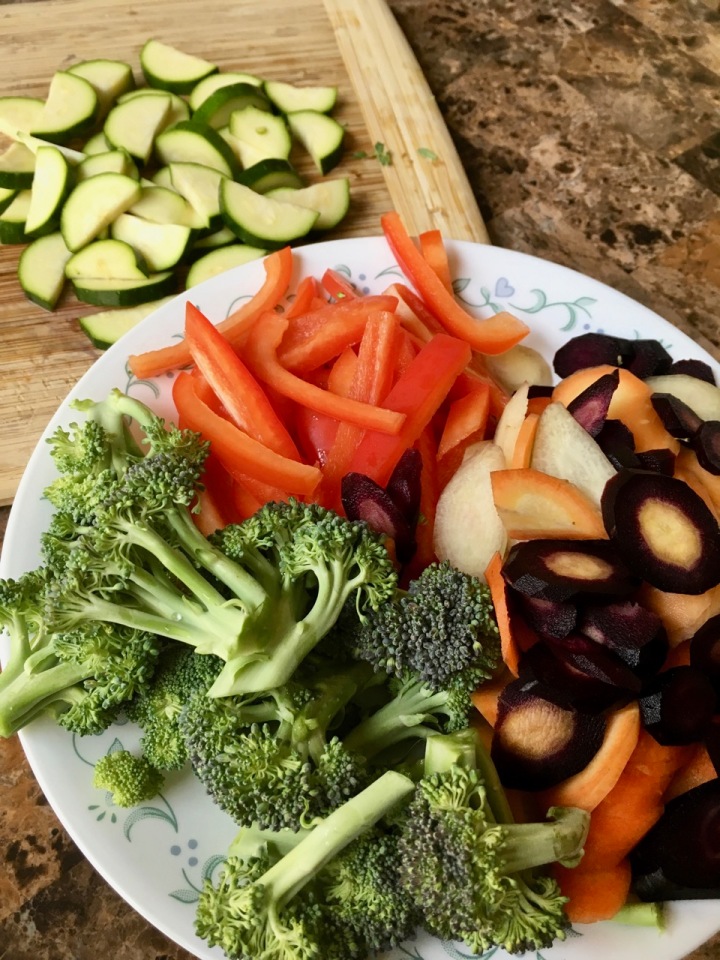 Broccoli, then carrots, then red peppers, then zucchini. (Not pictured: sugar snap peas, which I added whole and uncooked at the end.)

The veggies are cooked in batches, so you’ll want some empty plates on hand for dumping them out of the skillet. She good-naturedly entreats you to only cook each vegetable batch for a short time – generally 1 or 2 minutes max. This leaves them nicely crisp in the final dish, and helps them hold that crispness in the sauce. I like this idea in theory, but in practice I found that the broccoli and red peppers turned out a little hard for my taste. You could safely add at least 1 minute to each recommended cook time and still come out with crisp & very edible veggies. Definitely a matter of personal preference; just keep an eye on them and taste when you think they look done.

I do think the crisper vegetables will hold up better as leftovers, which is good news, because this makes a lot of pasta! It depends on how many different vegetables you add, of course. And this probably goes without saying, but this is one of the most customizable recipes out there. Carrots, peas, and broccoli seem like pretty consistent staples across recipes – this makes sense, since carrots & broccoli are cold-weather crops, and (some varieties of) peas are super quick to mature, so they all tend to be available early in the spring. But you could certainly add whatever you like and have on hand. Her version calls for mushrooms, which I left out, because I’ve recently admitted to myself that I don’t like mushrooms. (I got used to eating them as grilled portobello sandwiches during my years as a vegetarian, which were frequently the only veg offering at restaurants. I convinced myself I liked them, but with maybe one particularly well-spiced exception, it’s just not quite the same.)

Anyway. The vegetables all cook up pretty rapid-fire once they’re prepped and going. You cook them all in succession, then start the sauce in the same skillet. This was an unexpected time sink for me. My sauce took a looooooong time to cook down – like, at least 30 minutes. It doesn’t start off in the usual way of white sauces, with whisking flour into melted butter, which surprised me.  To be fair to the recipe, I do think some of this extended cook time was user error. About 15 minutes in, I discovered that at some point I had accidentally hit the little button on my stove burner that turns off the outer ring, leaving it cooking on the smaller inner ring only. I would be perfectly happy if this button didn’t exist; I don’t think I’ve ever pressed it intentionally, and it seems like its only purpose is to make me hate my life.

Also, I substituted white wine vinegar for the white wine. I frequently do this when we don’t have alcohol on hand; it tastes a little different of course, but still adds a nice acidic zing to the final sauce. Because I used less vinegar than the amount of wine called for, I added more chicken broth to compensate, and it’s possible I added too much without noticing. But even so, this is a lot of liquid! Two full cups of dairy (1 each of cream and half & half). Some people may not mind a thinner sauce, but I really need any sauce I use to at least coat the back of a spoon. Just a personal bugaboo. I stood and stirred for what felt like ages until I could finally see the bottom of the pan when I scraped the spatula across. 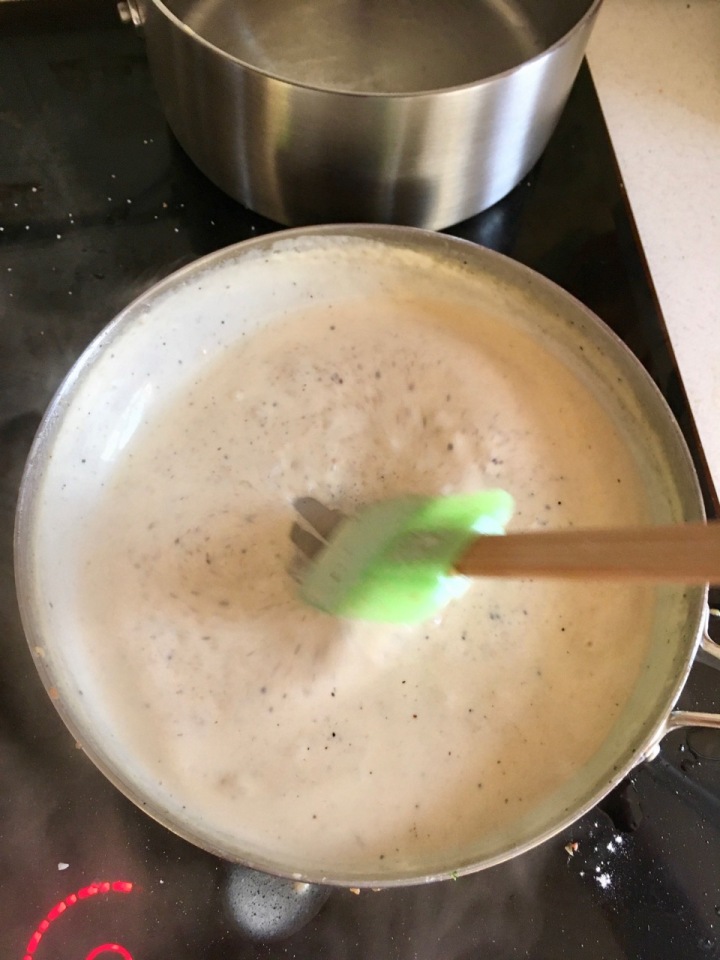 You can sort of see that the sauce is thick enough to reveal the bottom of the pan as I’m stirring. A surprisingly hard thing to get a photo of!

So. In the end, this took me over an hour. Refreshingly, her given time estimate of 50 minutes seems fairly realistic; with fewer sauce-related mishaps, I think I could get close to that time. And, most importantly, the end result was completely delicious. Each vegetable was a little crisp explosion of spring flavor. I was amazed at how sweet everything tasted, especially the carrots and onions. Spring produce is often harvested young, and I think it tends to be sweeter that way. And the sauce, which I was so worried about, was fantastic in the end. With cream and parmesan and salt and basil, you can’t really go wrong. 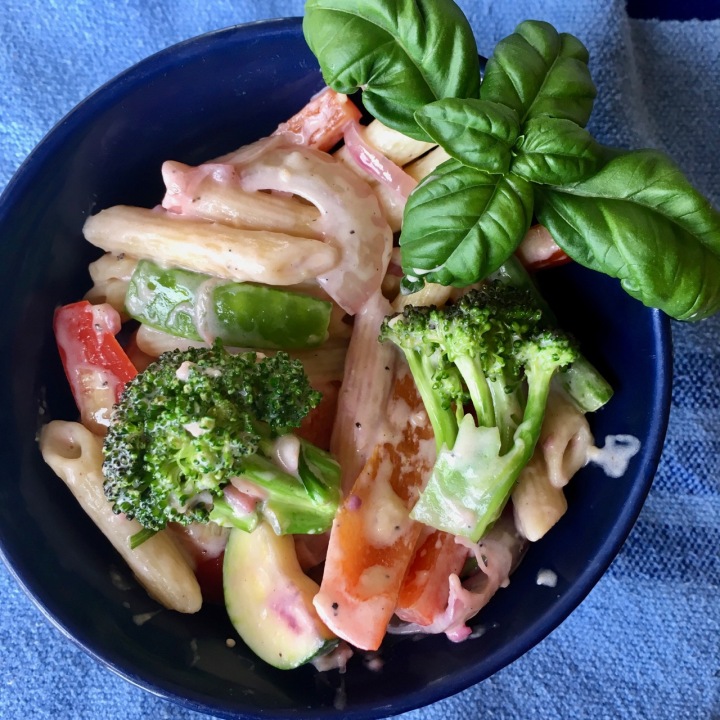 All in all, I am happy with the results of my most-highly-anticipated pasta primavera ever. That said, as great as it is to cook things from scratch, if you have a store-bought white pasta sauce you know you like, you could just use that. It wouldn’t be quite the same, but (in my case anyway) it would have cut the cooking time by at least half. Just something to consider, if you’re excited about eating more veggies but feel like this is a little over the top. Personally though, I think the sauce was worth the effort, and I’ll definitely be coming back to this recipe again, although possibly not until next spring.