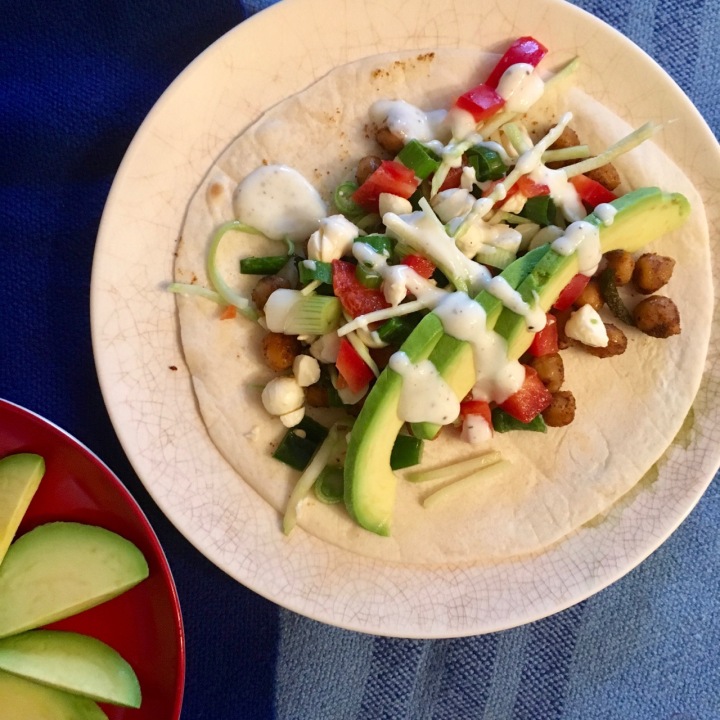 These tacos were the hands-down star of chickpea week. I’m already a big fan of Macheesmo, and these definitely didn’t disappoint. A creative change of pace from standard taco fillings, they’re a perfect snack or entree for hot summer days. No oven required; you just sauté the chickpeas for a little while on the stove.

I was initially skeptical of the prep time for these (prep time 10 minutes, total time 25 minutes), as recipes in general (and Macheesmo recipes in particular) often take me longer than the stated time. I may be timing it differently; I start counting when I walk in the kitchen door, but I think many recipe authors assume that some of the basic prep work is out of the way first. Things like getting out your knives and cutting boards, getting the spices out of the cupboard, untying the knots on the plastic produce bags (which I assume some adorable person out there is actually doing; I just rip into them obviously) and throwing them away. My kitchen layout is pretty middle-of-the-road, neither notably efficient nor irritatingly horrible, but I do find that logistical stuff like this adds up. I’m also still learning what order works best for each recipe I make; sometimes I realize I started the wrong thing first and could have saved a lot of time by chopping one thing while something else was roasting, etc. I’m getting better at it, but with a new recipe it’s not always obvious right away.

Anyway, all that to say that I was pleasantly surprised with how quickly this came together. I mixed up the chickpeas first and started them frying while prepping the other ingredients. Since the cooking time for the chickpeas is pretty flexible, it worked out really well.

I also saved time by using a pre-chopped broccoli slaw mix in place of radicchio, since I find radicchio too bitter. I looked for sliced cabbage at my grocery store, but broccoli slaw was the closest thing they had, and it turned out great. Honestly, I think you could substitute a lot of different things and still get a great result. You’re just trying to add a little crunch; any firm, mild-tasting green veggie, cabbage, or even kale or lettuce would probably be fine.

I also couldn’t find queso fresco at my local market. (My Canadian fiance tells me that Mexican food isn’t a big thing up here, which is good news as far as he’s concerned but super disappointing for me.) I substituted bocconcini, which as far as I can tell is some kind of mozzarella relative. I knew that queso fresco was a simple cheese, not aged at all but eaten fresh, and the bocconcini seemed to fit that description. It turned out fine; I think cheddar or spicy jack or even feta would also be tasty.

It all looked so pretty laid out in taco bar form. 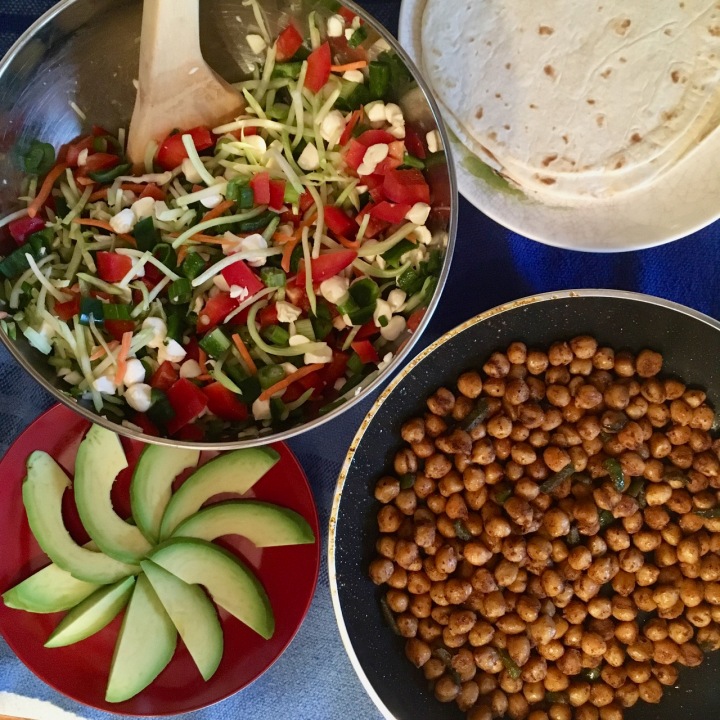 The lime sour cream sauce was fantastic – so simple to throw together and super delicious. I actually used the full lime’s worth of juice with the same amount of sour cream, and the extra citrus zing was really nice.

Keeping the sauce and veggie slaw separate makes it easier to store, too. I packed everything up and enjoyed it just as much for lunch the next day. But if you were serving a crowd, you could toss the veggies with the sauce to save a little time.

All in all, a super satisfying, light, and tasty recipe that I’ll definitely be making over and over this summer.