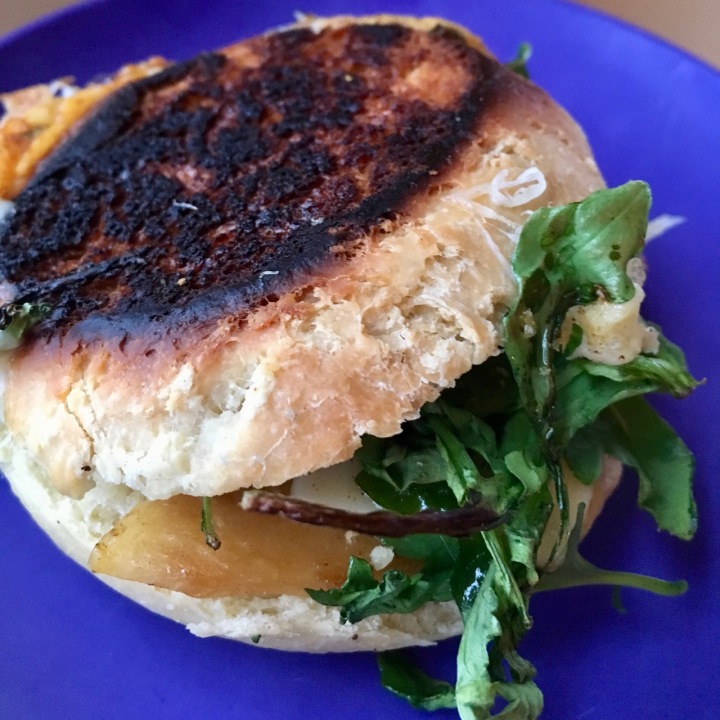 So, when this one came off the grill, I was prepared for a total write-off. I’m skeptical of fruit in savory dishes to start with – I only picked this one for this week because I had 2/3 of a block of leftover gruyere that I wanted to be sure to use, and it seemed like the easiest gruyere recipe on Macheesmo. Then, in spite of my efforts to keep the pan on medium heat, I managed to brown (i.e. blacken) the bread before all the cheese had time to melt. By the time I pulled the sad little heap off the stove, I wasn’t expecting to be too impressed.

But, much to my surprise, it was delicious! I’m officially a savory-fruit-sandwich convert, at least in this case. The flavors really complement each other: savory richness from the gruyere, sweet-but-not-too-sweet fruit, and a little peppery bite from the arugula. It was hearty but also light; a summery comfort food. These were also made on the homemade King Arthur buns mentioned yesterday

Two tips for keeping this sandwich together while grilling:

Our sandwiches were also pretty thick, on small buns. Next time I try this, I’ll use regular-sized bread, and try to slice the cheese and peaches thinner. The tongs might not be necessary with those changes. 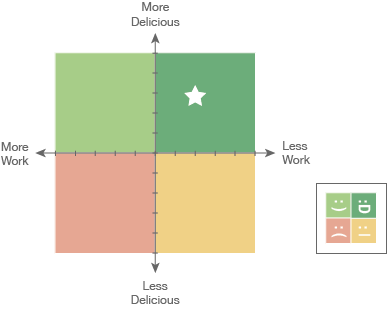 Every time I set out to make this recipe, I’m intimidated by how much work it’s going to be, and every time I’m surprised by how quickly and easily it comes together. I think I get scared initially because it involves making a sauce from scratch, and I’m still a little mystified by sauce chemistry. What if I burn the flour? What if the sauce breaks? It feels like a lot of high-risk, split-second timing, and I’m still not totally clear on the whole emulsification process, and how or whether I can re-emulsify a sauce that has de-emulsified.

If that’s all Greek to you, just don’t worry about it, because in this case you’re pretty much just throwing cheese in a pot and it’s delicious. Someday in the future, I’ll do a breakdown of the different types of sauces; supposedly if you can master the five “mother sauces,” you have the building blocks for a lot of different dishes. (It kind of sounds like something out of a kung fu movie.) But for this dish, you’re just making a simple cheese sauce, and I find that it’s pretty forgiving. You start by sautéing diced onions and garlic in butter, then add a little flour and stir for a minute before adding the milk and cheese. I had everything measured out and sitting ready before I started, and I also stood there watching the sauce the whole time, without trying to multi-task. In the course of my cooking adventures, I’ve definitely sacrificed way too many perfectly good sauces and veggies and baked goods because I was trying to do too many things at once. Parallelization is all well and good, but sometimes it pays to just stop and focus. This is one of those times; just pay attention to the sauce and it will come out amazing.

(That said, I think I did chop up the spinach and artichokes while the cheese and milk were cooking down. No big deal; I just set up the cutting board right next to the stove and kept an eye on it, stirring occasionally.)

This sandwich is basically a cheddary spinach artichoke dip in grilled cheese form, which is just as incredible as you’d expect. I didn’t have time to make the homemade potato chips like she suggests, but we just had some oven-baked fries alongside and it was great. Gooey, hearty, cheesy goodness – definitely a good choice for when you’re in the mood for pub fare but don’t actually feel like going out. 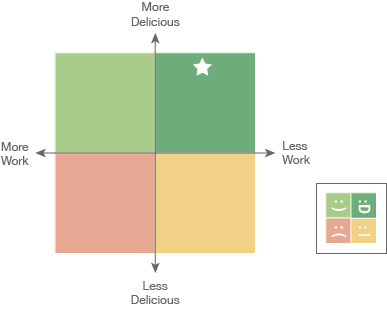